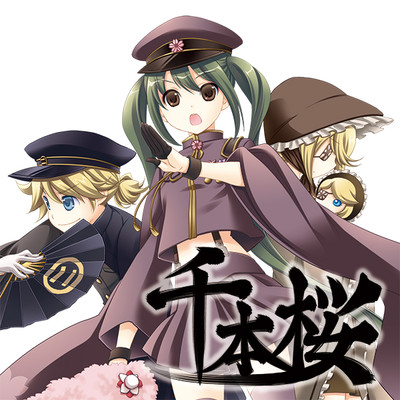 Taisho Year 100. After the old capital, Tokyo's destruction in the Great Taisho Disaster, the seasons pass and a new capital, Ohkyo makes a miraculous recovery centered around the holy cherry tree known as "Senbonzakura". However, following the Disaster, dark and evil paranormal events grow more common and the Kami-Tsuki Special Sakura Platoon take a stand to protect peace in the capital! Meanwhile, on a spring day, Miku has come to view cherry blossoms with her family. When searching for her older sister, she gets lost herself and comes across a gigantic cherry tree! Suddenly Miku finds herself wearing military clothes and under attack by a transgender ninja! And then she's rescued by the twins Rin and Len, who call themselves members of the Kami-Tsuki Special Sakura Platoon...?! The manga adaptation of Kurousa P's smash hit Vocaloid song, which has over 80 million views, by manga artist Shoko Iwami based on Maru Itto's novelization is here!!